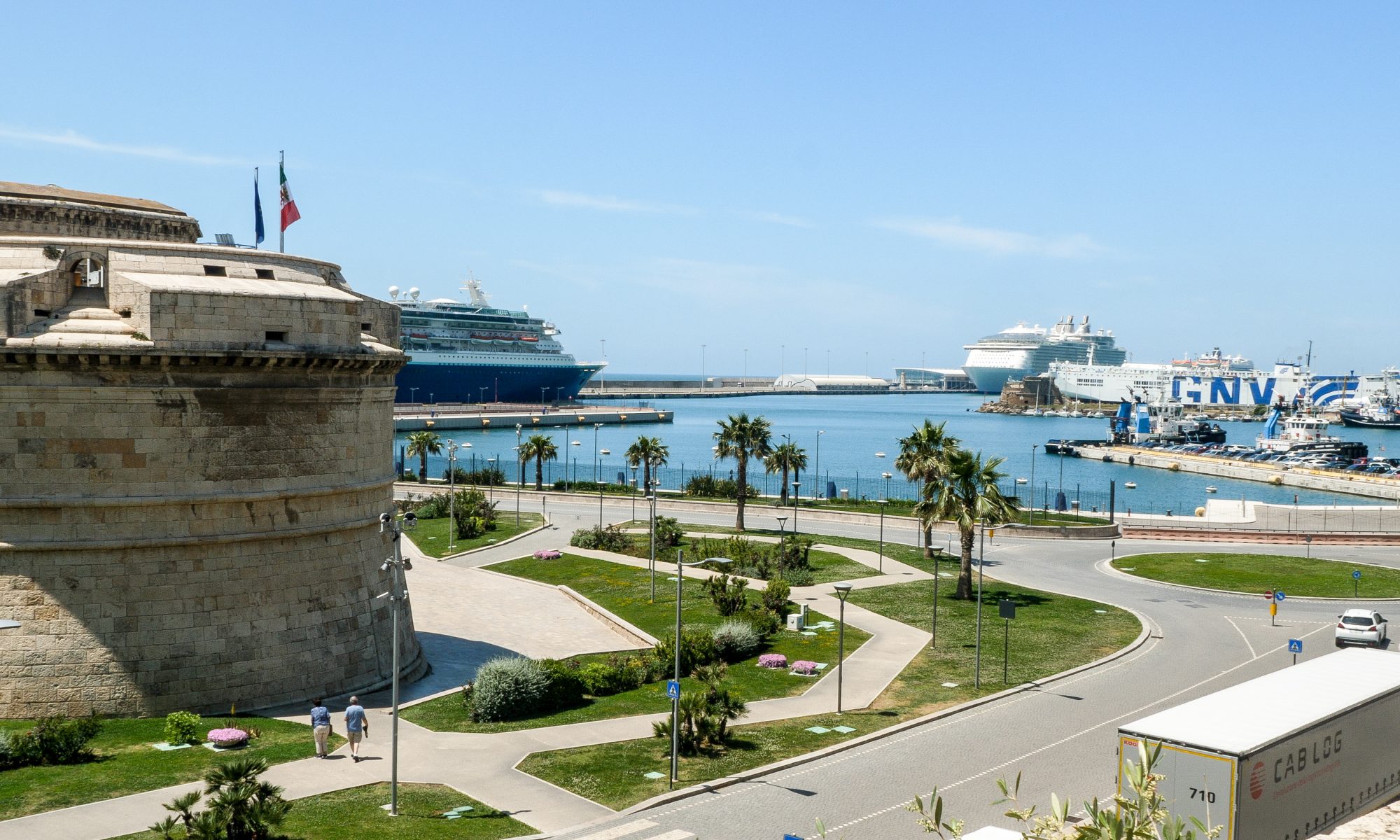 Civitavecchia is Rome’s main cruise ship and ferry port, and was one of the stops on a Royal Caribbean cruise last month that Chris and I took from Barcelona.  I had first imagined Civitavecchia to be just another busy, grimy port that would just be stopover for other places to visit.  But after noticing a medieval fort right at the end of the port, we thought the city might be interesting enough to see on its own. Instead of joining the busloads of cruise ship passengers bound for Rome on their day-excursions, Chris and I decided to spend the day at Civitavecchia to check it out. 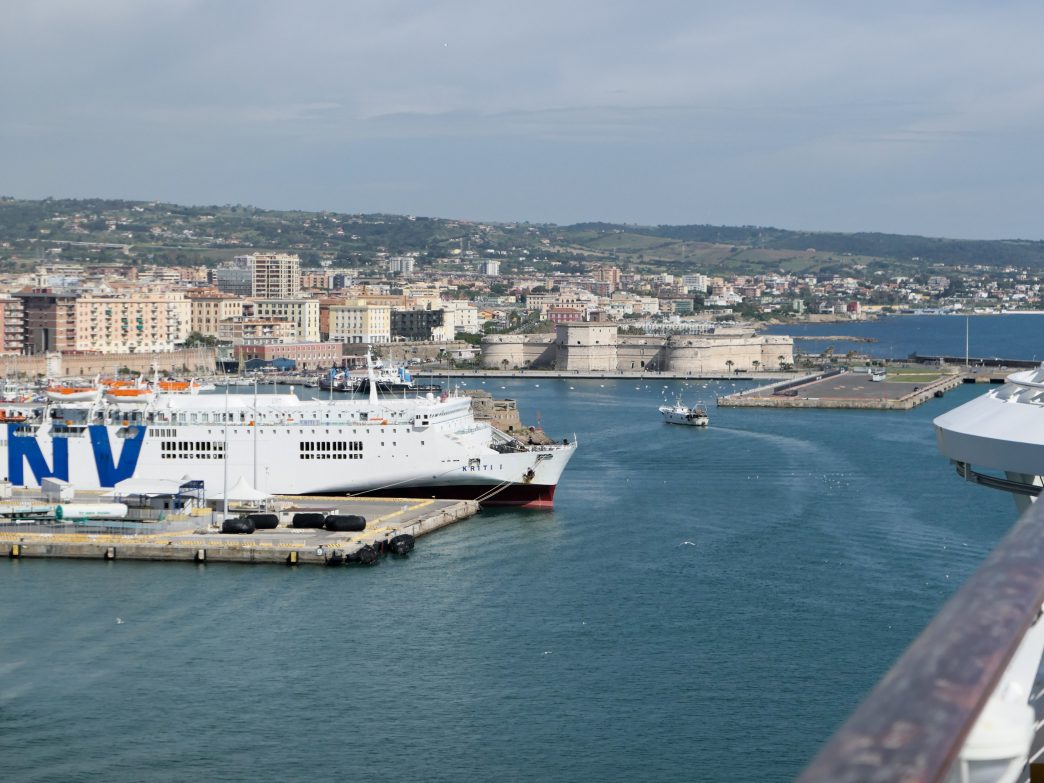 The city has quite an interesting history. The present city sits atop an ancient Etruscan settlement. After the Romans occupied the city around 100A.D., Emperor Trajan built the port, and it has  remained Rome’s main port for the last 2000 years.

The city runs a very well-organized system of free shuttle buses that connect between the cruise ships and a small bus terminal just outside of the city center.  It’s easy to connect from the bus terminal to trains to take you directly to Rome or to other destinations. 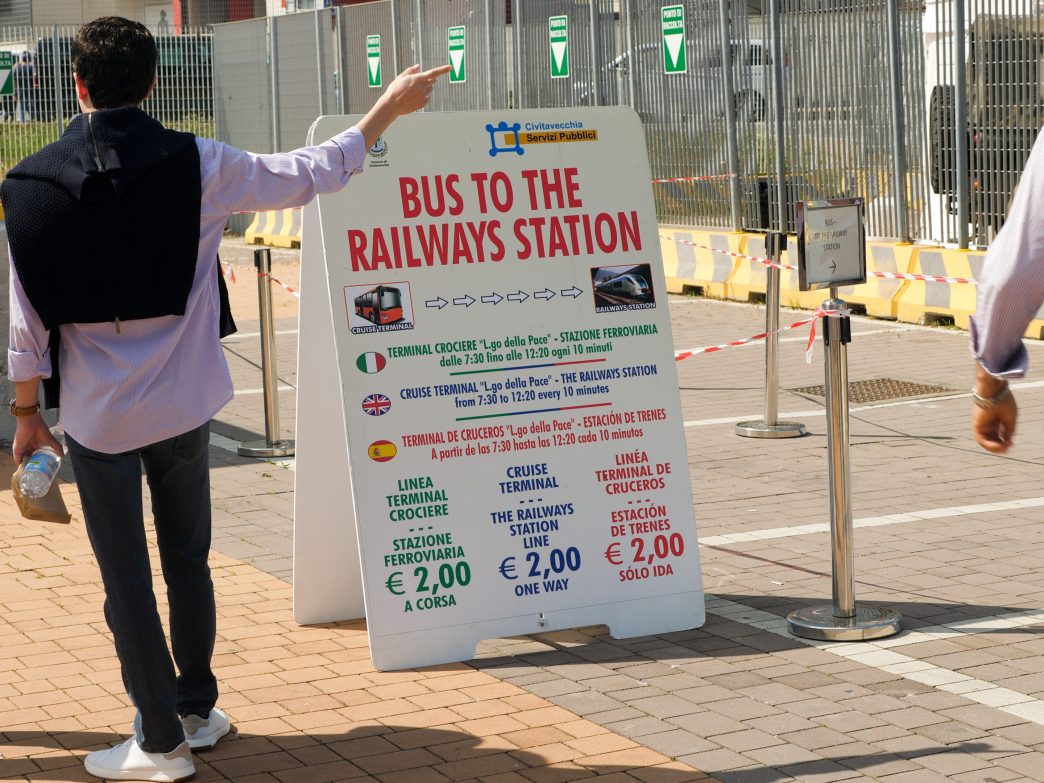 The bus terminal is to the left of city center on the map. We made our way to the historical city center toward the center of the map. 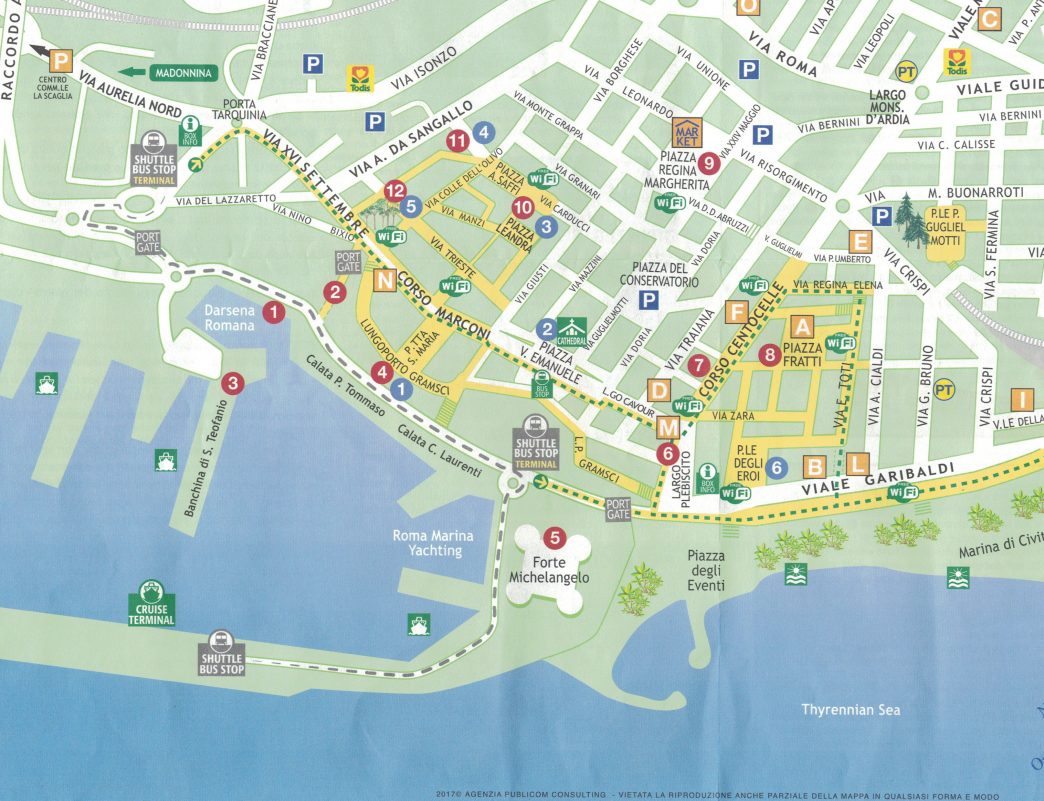 Along the way, we noticed lots of signage throughout the city making it easy for us to find our way around. We didn’t need any guides and didn’t have to contend with large crowds of tourists crowding the sidewalks! 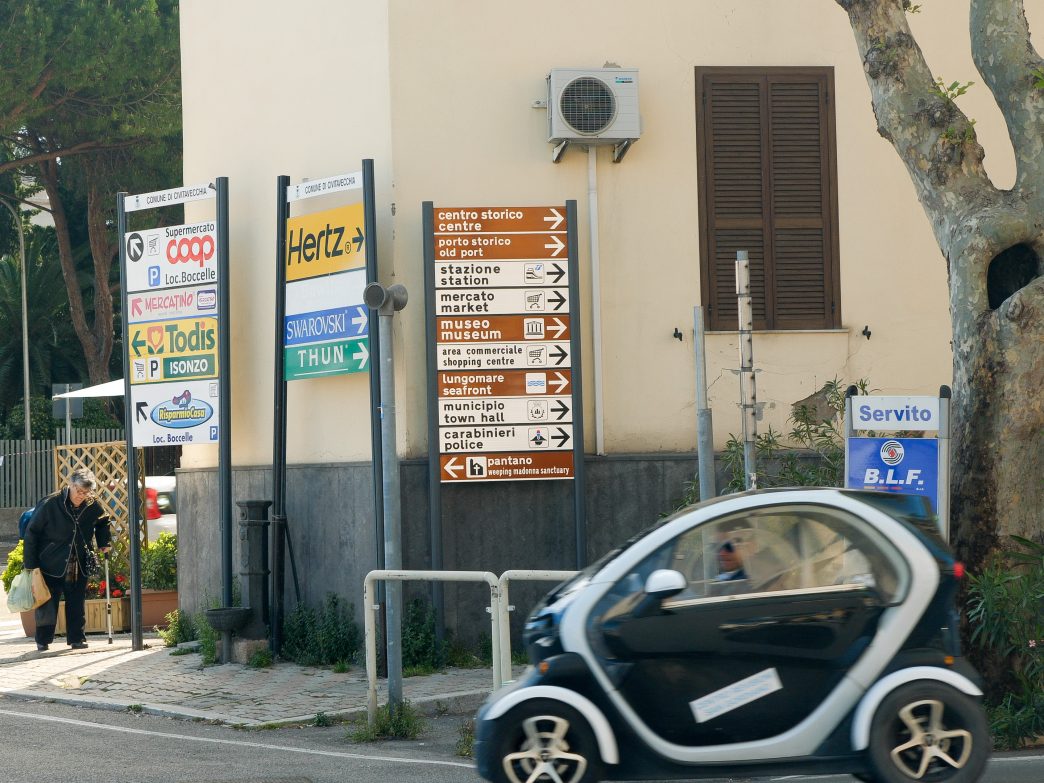 Soon we ran into one of the largest local traditional markets that I’ve seen in any Italian city.  The market occupies the entire Piazza Regina Margherita. Vendors were selling everything from vegetables, household goods, clothing, and meats. 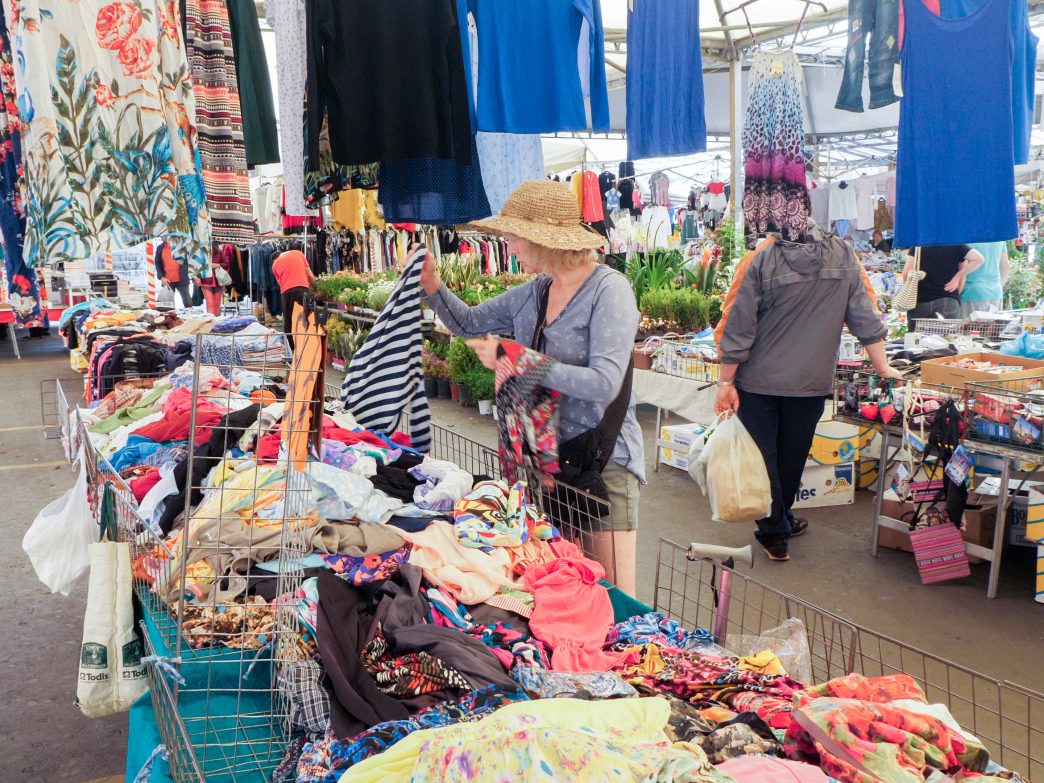 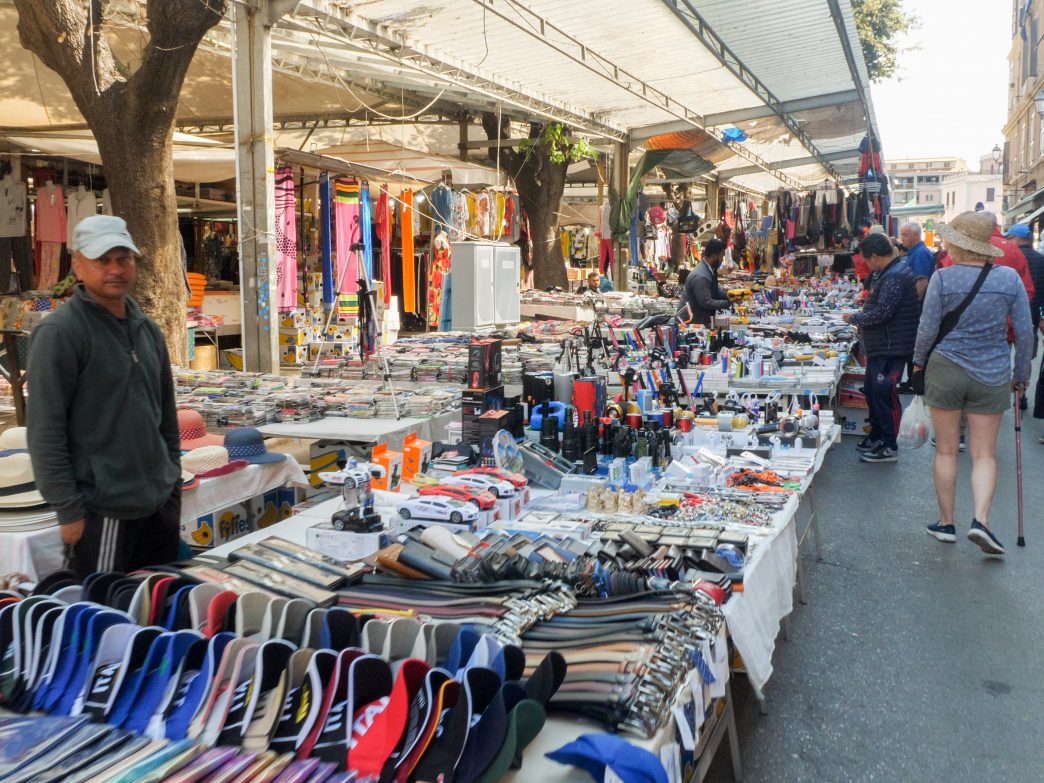 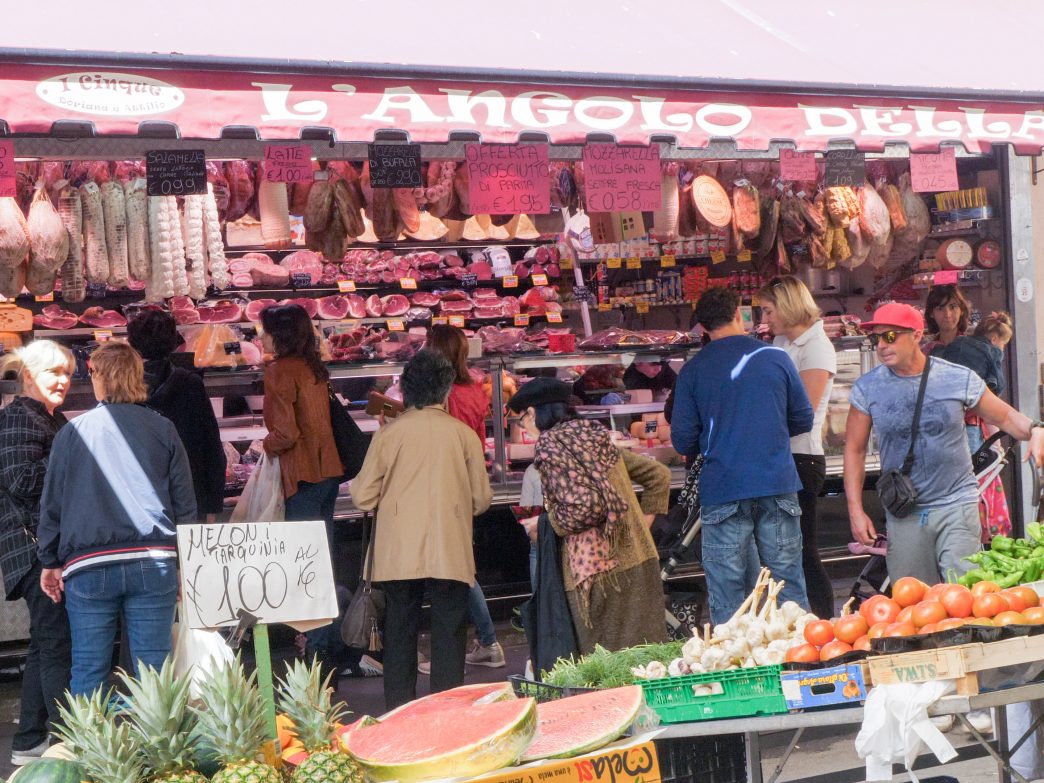 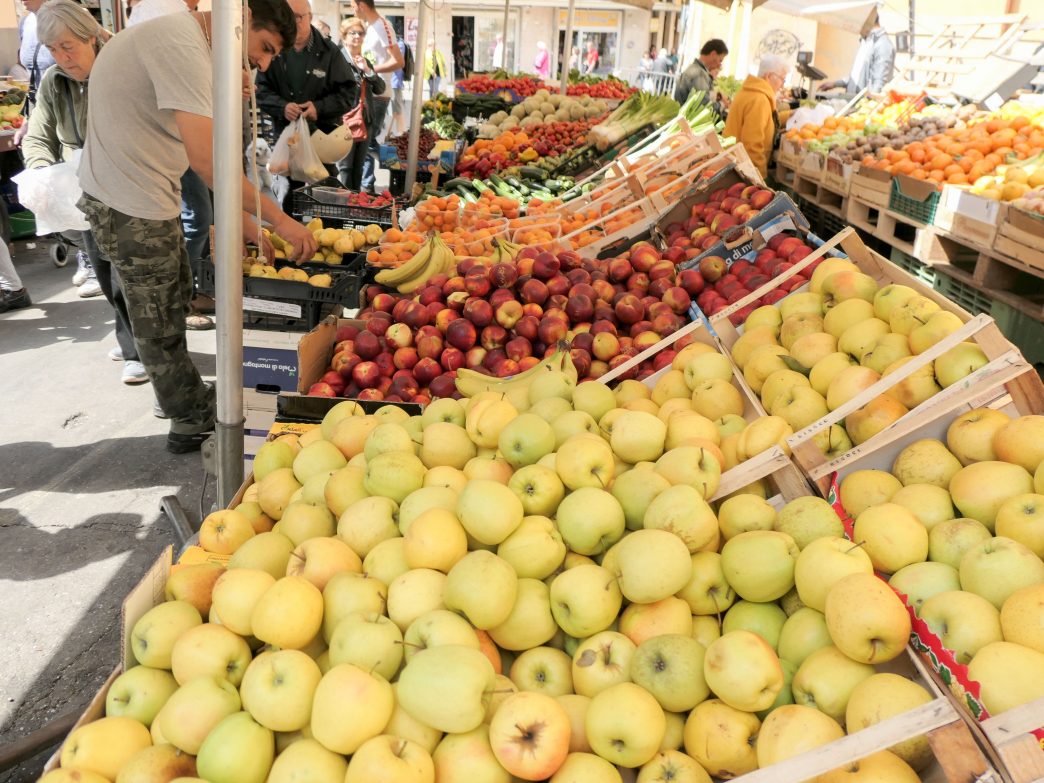 Along one side of the market we walked into a building that was a dedicated fish market. We both noticed the market didn’t smell “fishy” at all, a testament to the freshness of the fish that’s sold there! 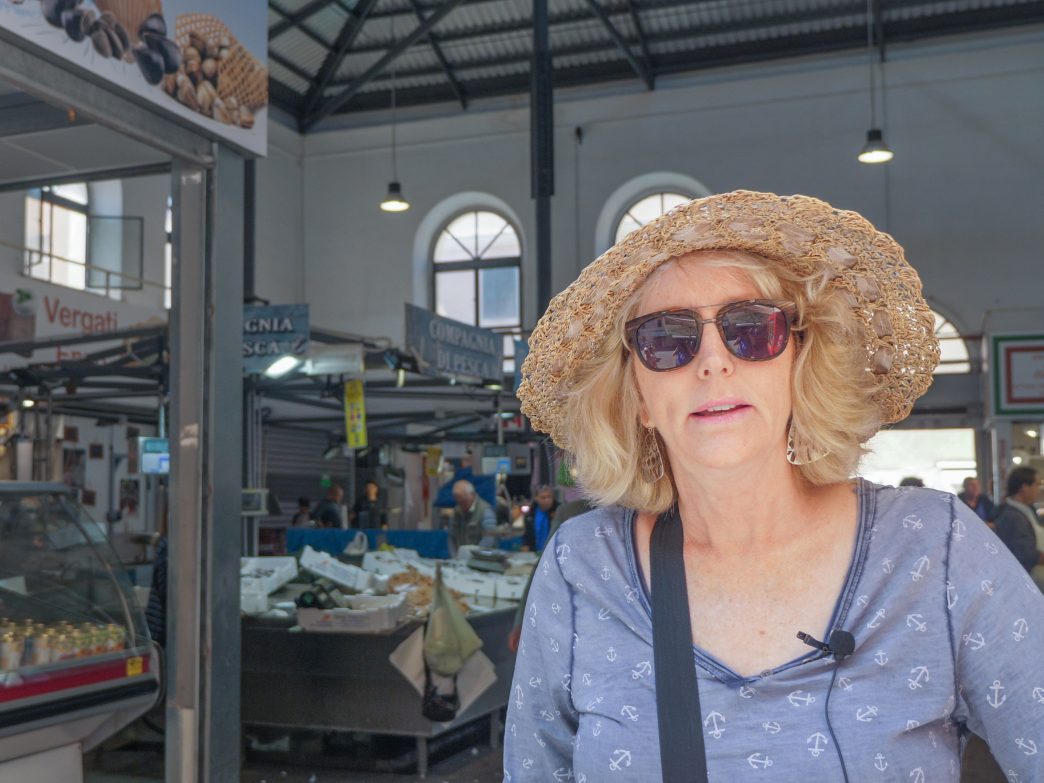 Just a block away from the bustling market, we noticed how peaceful the residential areas of the historical center were, with no crowded tourist shops or expensive handbag stores to be seen anywhere! 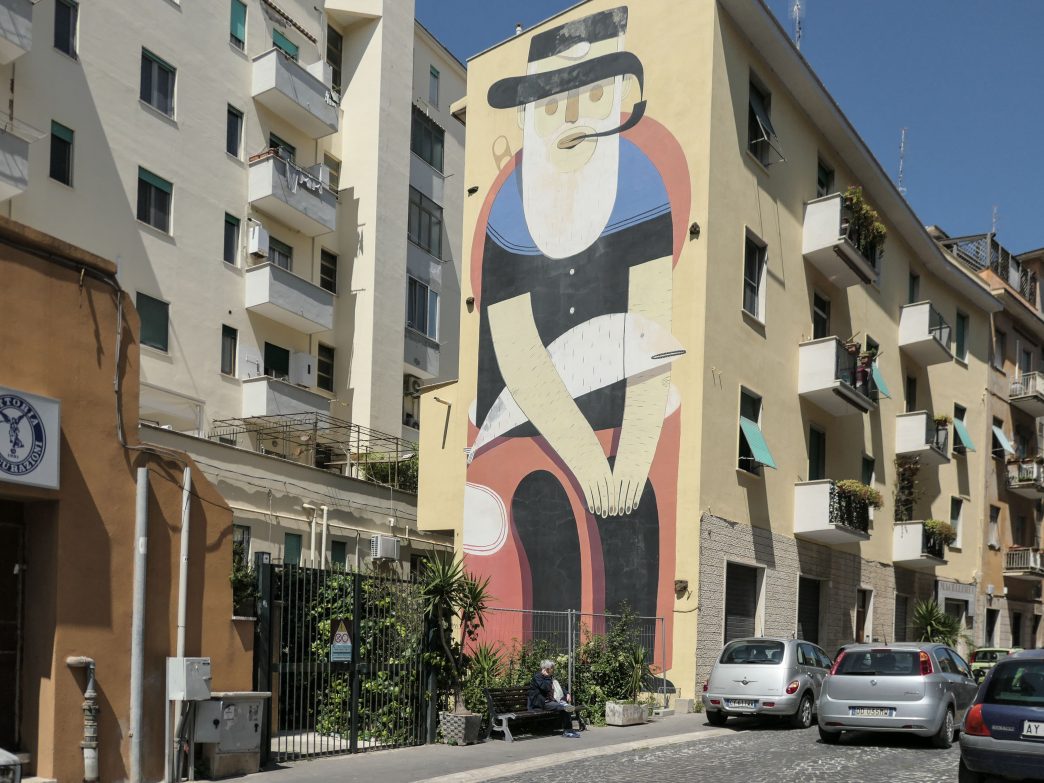 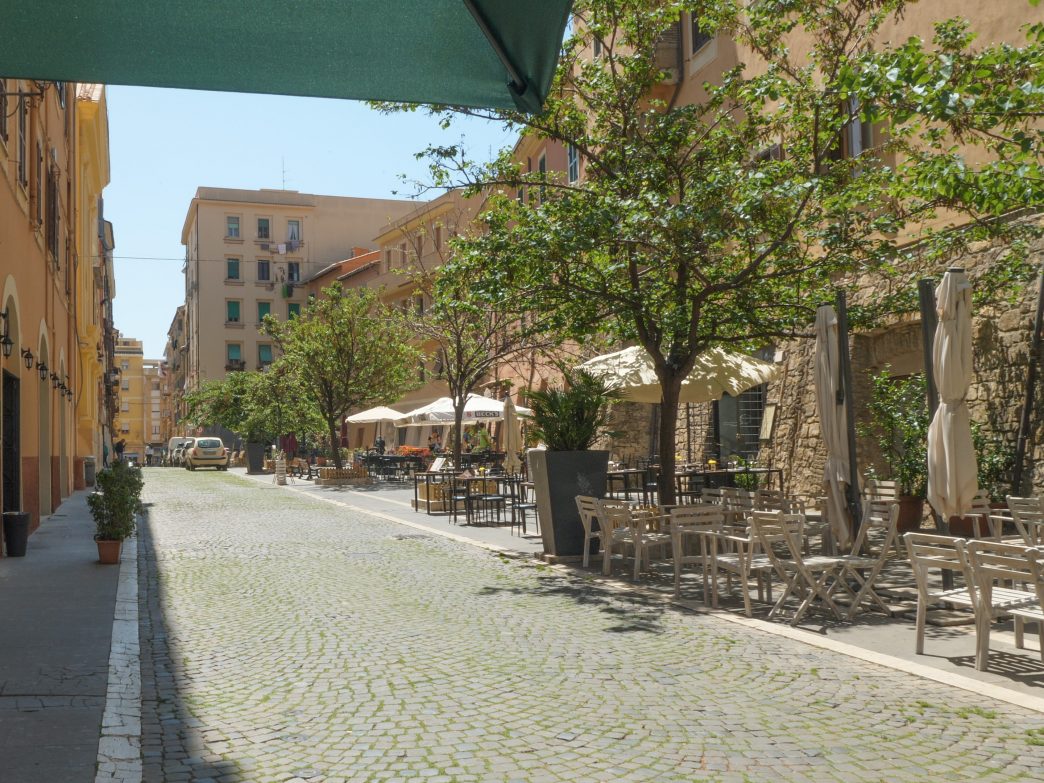 We had a tasty seafood lunch at an L’Acqua Salata and enjoyed sitting outside along a quiet pedestrian-only street. 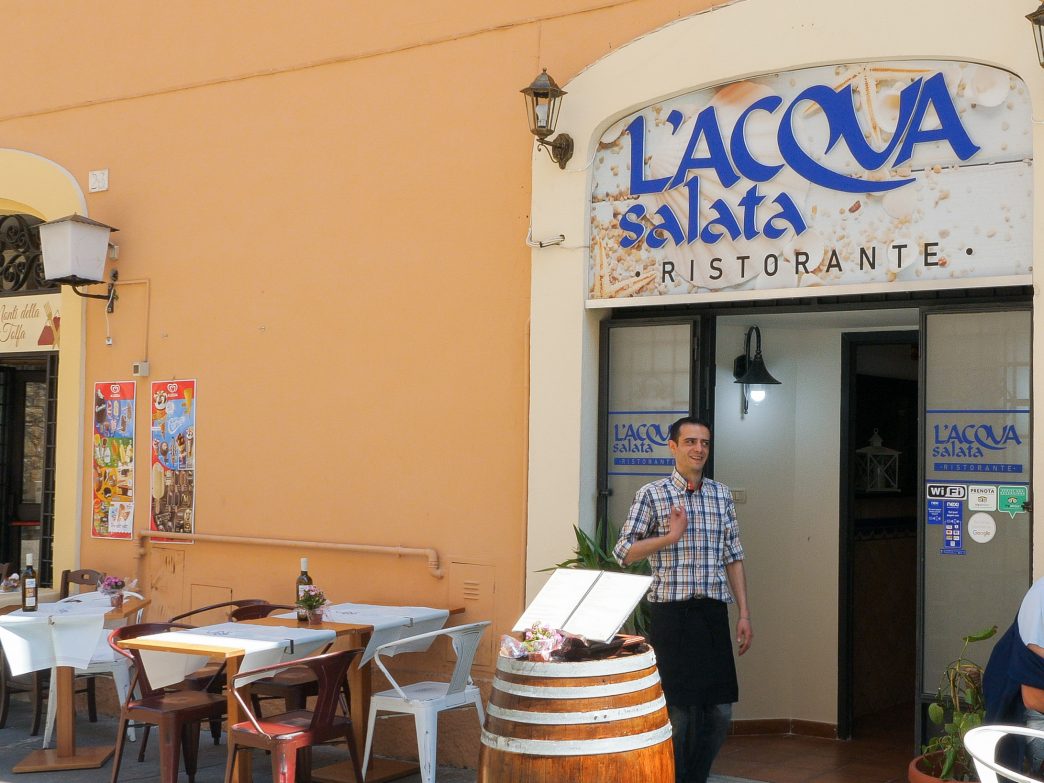 Continuing our walk toward the other end of the historical center, we found ourselves on a terrace overlooking the Forte Michelangelo and the adjoining harbor.  Our Oasis of the Seas ship on the right looks close, but it’s about a 20-minute walk away from the fortress. 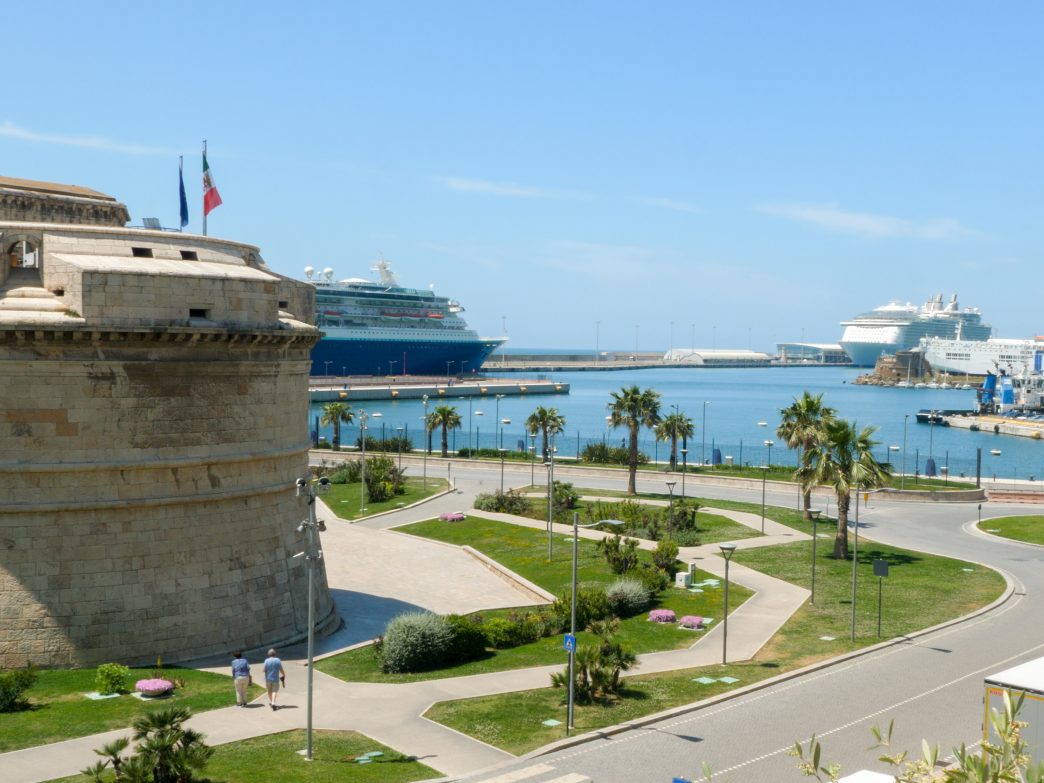 This fortress was commissioned by Pope Giulio II early in the 16th century, and was completed in 1535 when Michelangelo finished its construction after designing and building its central tower. 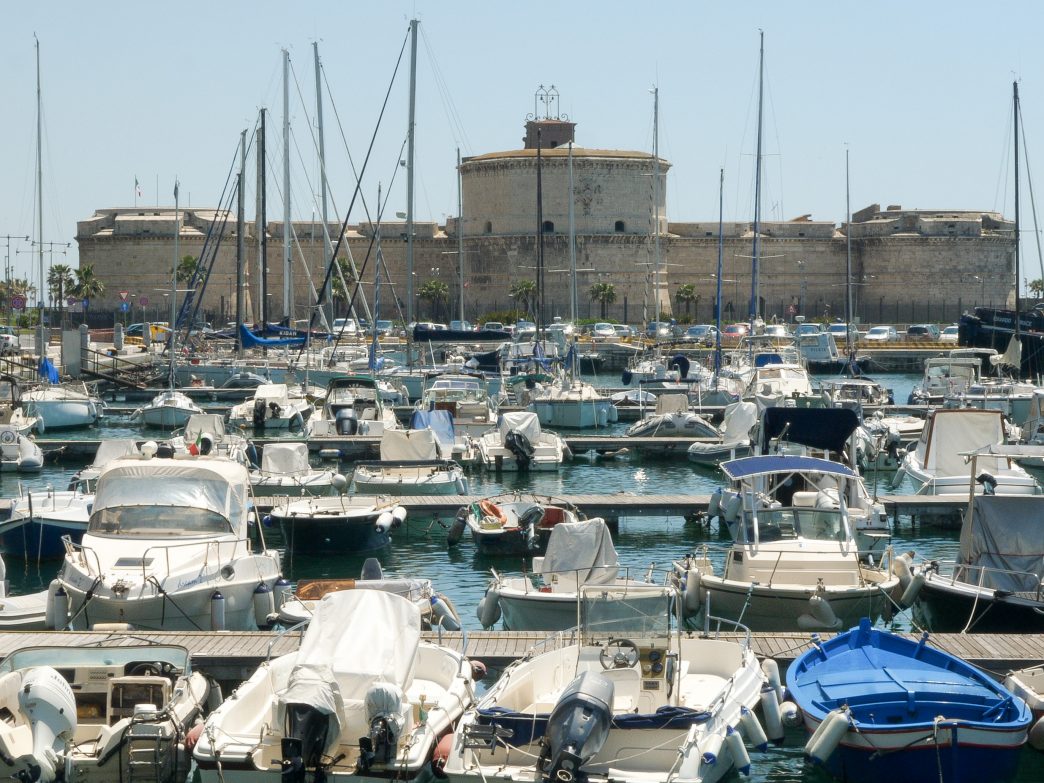 The fortress is surrounded by lots of grassy areas and walkways, and is now used mostly for exhibitions and cultural events. 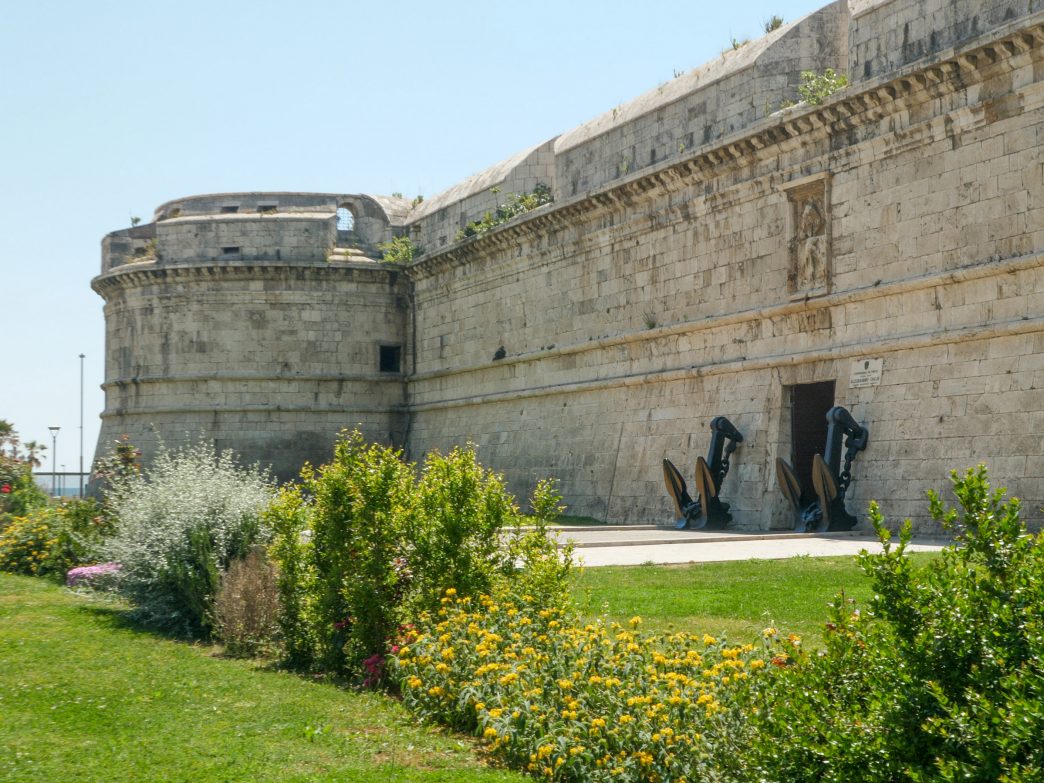 Walking back to the bus terminal along the port, we noticed some remnants of the original ancient Roman port, including what is left of “Il Lazzaretto”, a contagious-diseases hospital. 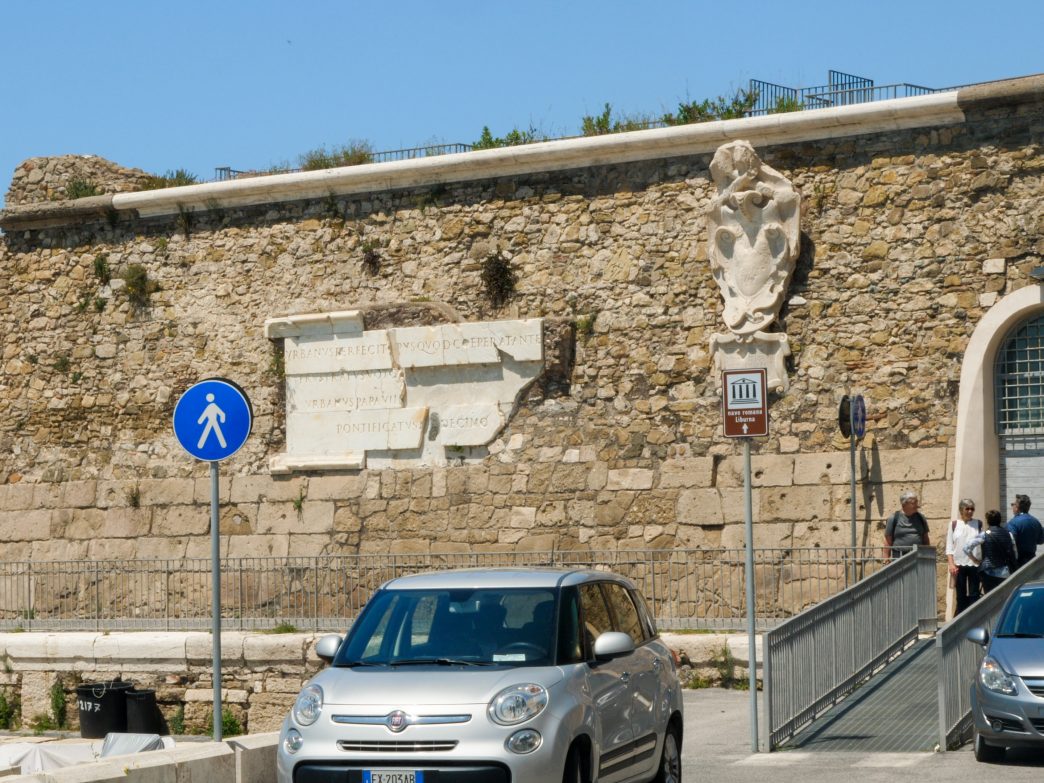 Right behind this building, we saw a reconstruction of the bow portion of a second-century Roman warship. 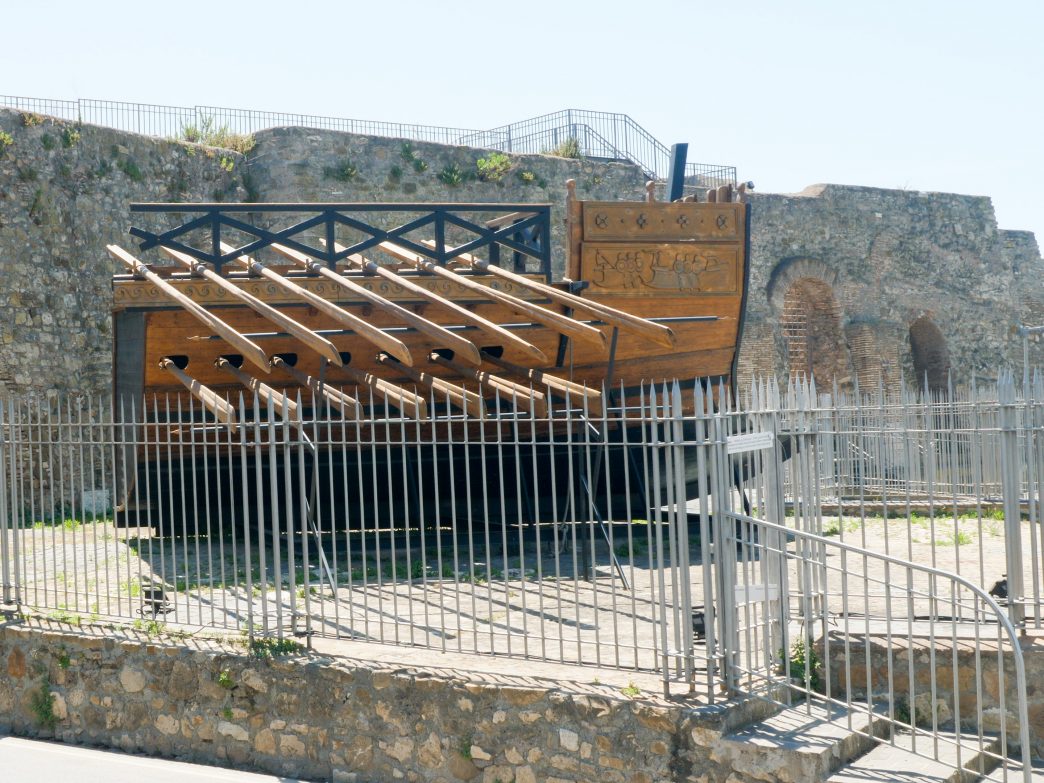 We made our way back to the bus terminal and had no wait at all to get on a bus to take us directly back to our cruise ship.

Chris sums up our visit in this video:

Next time you’re in Civitavecchia, either to begin a cruise or on a cruise stopover, consider taking some time to enjoy the peaceful, traditional Italian town. We found it to be a great “home away from Rome”!