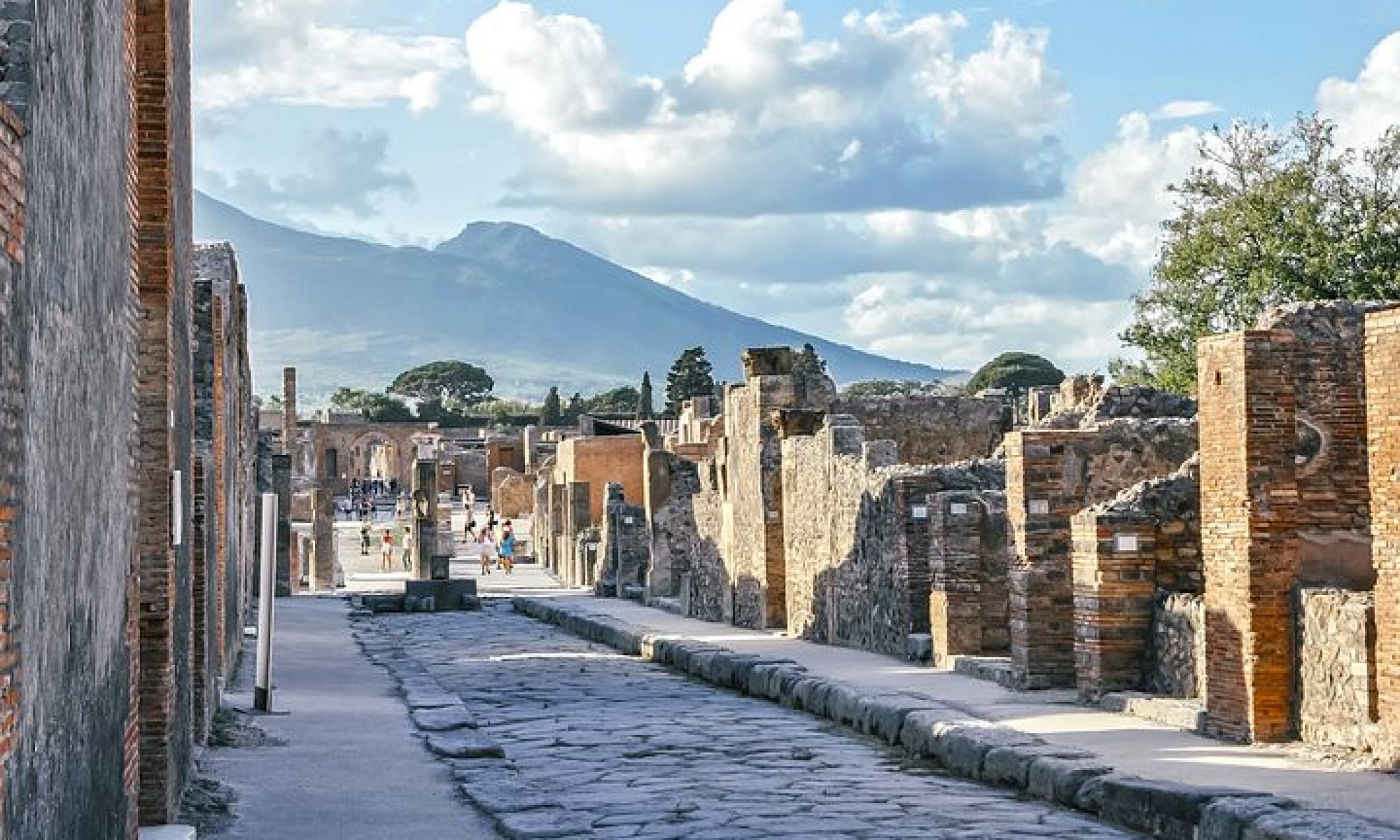 Every so often one gets a snapshot of a moment in history; a faded photograph, a piece of nostalgia, everywhere we go there are glimpses of the past.

These little bits when stitched together can create an idea of what life was like in a certain time period. And in fact, many historians and archeologists spend their entire lives lovingly stitching together moments to create a pure line of history as carefully and patiently as grandma stitched her quilts.

So imagine visiting a place frozen in time where no stitching necessary to see exactly how an ancient people lived almost 2,000 years ago.

Such is Pompeii, a wealthy city located along the shores of Mediterranean Sea a short distance south of Naples in Campania, Italy.

If you are unfamiliar with Pompeii, It is an ancient Roman city that was completely overwhelmed and mostly covered up by the eruption of Mount Vesuvius in 79 AD. Subsequent eruptions buried it further and it was not until the 1700’s that archeologists really understood what lay beneath the years and layers of dust and volcanic ash that preserved these ruins beautifully, until they were finally excavated.

When they were, archeologists discovered a magnificent jewel of a city frozen in time more than 2000 years ago when all life suddenly stopped.

The dust and ash that covered Pompeii had the effect of perfectly preserving everything it touched including frescoes, buildings and even food that was to be sold at the markets that day and consumed for the next meal that never arrived.

Preserved were the city streets, the tiled walkways and floors, the sidewalks. And as you walk these ancient streets, despite the crowds that normally flock to Pompeii in the high season, you can get a feeling of exactly how the people lived so long ago and how they died suddenly in the catastrophe that was the eruption of Vesuvius.

It took many decades for Pompeii to be excavated to the extent it is currently, however today, the excavation site at Pompeii is huge.

As you can see from the overhead view from Google Maps, the city of Pompeii spans four and a half miles. A shady, tree-lined walkway takes you into the park. The modern shops, stalls and restaurants are a stark contrast to the ancient city, but oddly only superficially. These modern shopkeepers need to make a living selling their products just as the ancient people of Pompeii did.

Prior to the catastrophe, Pompeii was a thriving port town and an important trading hub. The excavation of amphorae revealed a busy trade in wine and olive oil.

The farmlands surrounding Pompeii were rich in volcanic soil and created an abundance of agricultural crops including grapes, barley, wheat and millet. These were all grown for export to various parts of the Roman Empire.

As you walk the streets, you see complete apartment buildings and shops. There are also a myriad of food stands that catered to customers, complete with menus frescoed on the walls. Walking in today is just like walking in in August AD 79. You almost expect the proprietor to wipe the counter in front of you and stand there waiting for your order.

The presence of beautiful villas with lavish wall decorations and gardens points to the fact that Pompeii housed many successful people. Nero himself visited Pompeii and was said to have performed there.

Life was rich and good in Pompeii, that is until August 24 AD 79 when everything changed.

(New evidences suggests that the date was actually later than August and was more likely as late as November. This is due to several factors such as the clothing worn by the victims, which was heavier and more Winter type clothing. Also important is the fact that the fruits and vegetables being sold at the market at that time were also Winter products and that there were chestnuts in the market which would not have been available in August. These facts all seem to point to a later date.)

The eruption that buried Pompeii took place over two days. Prior to that time, for at least 17 years, Pompeii had been subject to earthquakes. In fact some archeologists believe that parts of Pompeii were still being repaired from the previous destructive earthquake in 62 AD which had destroyed much of the city. Others disagree and state that much of the city had been repaired and new buildings had been added.

The first 18 hours consisted of a rainfall of tapilli, small volcanic particles that rained down on the city. This warning was enough for some residents to leave to city taking whatever valuables they could. Since there have only been about 1,150 bodies recovered out of an original  population of about 20,000, we can surmise that most people actually did leave the city either after the first earthquake in 62 AD, years earlier or just before the eruptions turned into the deadly pyroclastic flows, the “Walls of Death “ that ended up entombing the city and annihilating any inhabitants left.

A pyroclastic flow is a billowing cloud of 700C gas, ash and rock that scientists now believe flowed from Vesuvius on a cushion of air allowing the flows to reach speeds of 750 km per hour.

While initially it was believed  that the victims were overcome with ash that caused their demise, it is now believed that the heat of the pyroclastic flows killed them instantly upon its arrival even if they were inside buildings or other structures.

Discoveries of mass casualties in a cave near the sea reveal that even those who took refuge succumbed in the same fashion. The cave discovery, near Herculaneum revealed that several of these people had gathered up their most precious belongings, gold bracelets and earrings and coins, and sought shelter thinking that the cave would save them. Sadly this did not occur and they succumbed with the others in Pompeii and nearby Herculaneum.

At that time volcanic ash covered Pompeii to a height of almost 20 feet.

And she lay there for centuries until she was found.

On a peaceful Spring or Summer day you can explore Pompeii although it takes more than a day to see it all.

There are three separate entrances as the park is so big.

Pompeii has many noteworthy sights however here is a short list of a few of them:

This temple features Etruscan architecture and is thought to be the oldest structure in Pompeii having come up through history from Etruscan occupation, through the Greeks and finally the Romans.

The House of the Faun

This particular villa is one of the most famous sights in Pompeii. As a villa it covers an entire block and was home to the Alexander Mosaic which depicts Alexander the Great fighting the Persians. Intact are the geometric floors, however many artifacts have been recovered there as well. Named for a statue of a faun that was found there, this house depicts the lavish lifestyle and success of some of the people in Pompeii.

The Forum At Pompeii

Like the Forum in Rome, the Forum of Pompeii was the center of life in this ancient city. Government activities were carried out there and nearby, one found shops, markets and baths.

As you wander through this formerly buzzing space, you can still feel the activities as though they were still occurring despite their 2000 year hiatus.

Ancient Rome was big on bathing and no wealthy Roman city would be without its luxurious baths. Hot, cold and tepid baths were provided for those looking for a day out and a little cleanliness.

A visit to Pompeii seems to always end up with lines of tourists waiting to see the Lupanare or the brothel ruins. In fact, there were several brothels in Pompeii and curious tourist minds want to know.

All through Pompeii there are various houses identified as to who owned them. The house of the lonely poet, the house of the surgeon, The house of Pansa all giving a snapshot frozen in time of a vibrant city that suddenly stopped like a broken clock.

Getting to Pompeii by train is relatively easy. From Naples you can either take the Circumvesuviano which takes about 35 minutes to cover the Pompeii-Naples route or you can take the Metropolitano which will get you to Pompeii In 38 minutes, Please be wary while on these trains and in Naples in general as there are pick pockets much like in any big city. However they do seem to haunt the train routes to the attractions so extra care should be taken. An over the shoulder bag that zips up and with straps that cannot be cut through is perfect for both men and women for carrying valuables. Never carry your wallet in your pockets.

I hope you have enjoyed our little trip through Pompeii. You definitely have to experience it in person. And when you are there come a little further south and visit us in Calabria. We will look for you there.