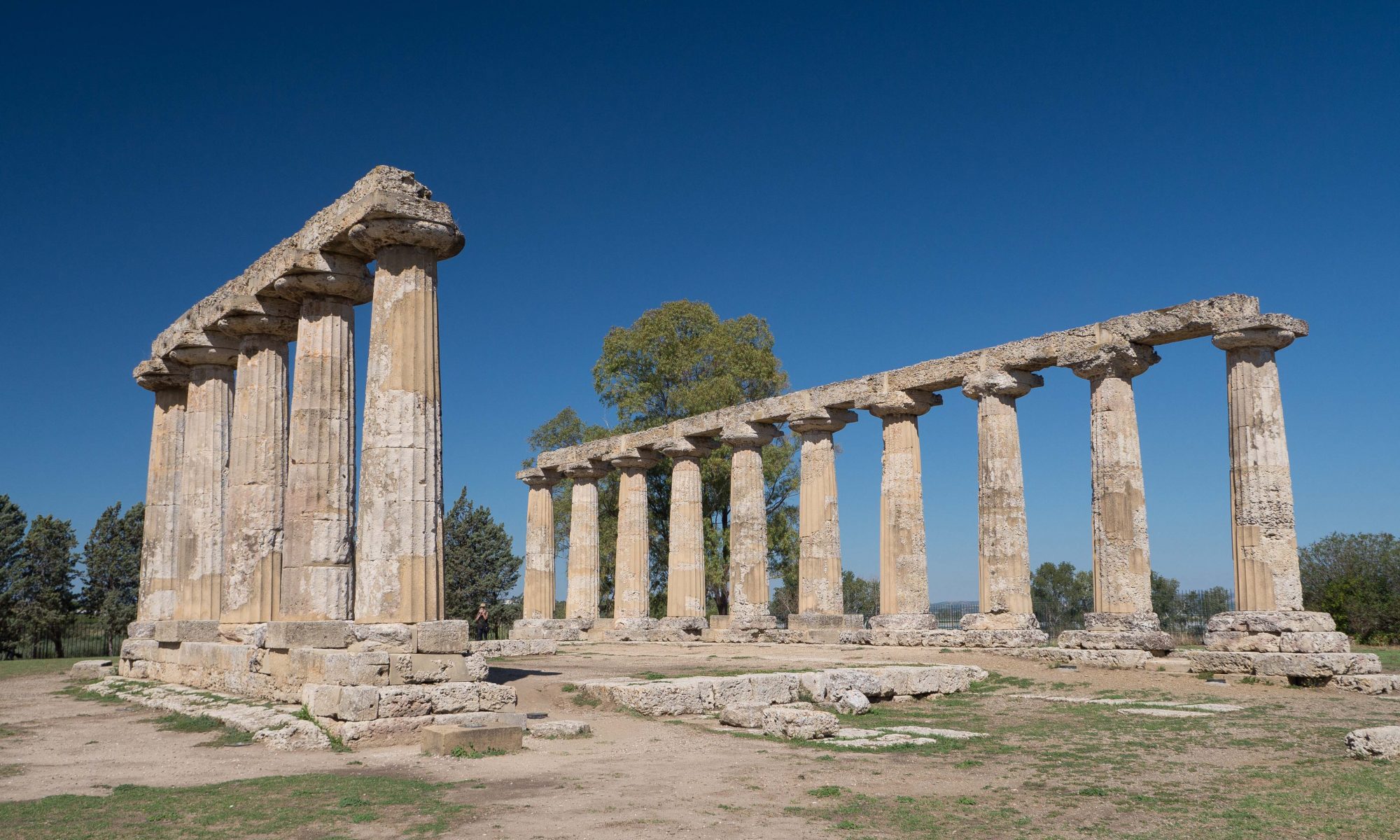 One of the things I really enjoy about Italy is that it is like an open-air museum,  with new things to continually discover about the origins of our Western civilization. Southern Italy is really interesting from this standpoint since it was extensively colonized by Greek settlers starting around the 8th century BC (see my previous blog post). Chris and I saw even more evidence of this on our way back to our village in Calabria from a visit to Matera last summer. The route back from Matera suggested by Google Maps ended up taking us along the Ionian Sea for a short distance: 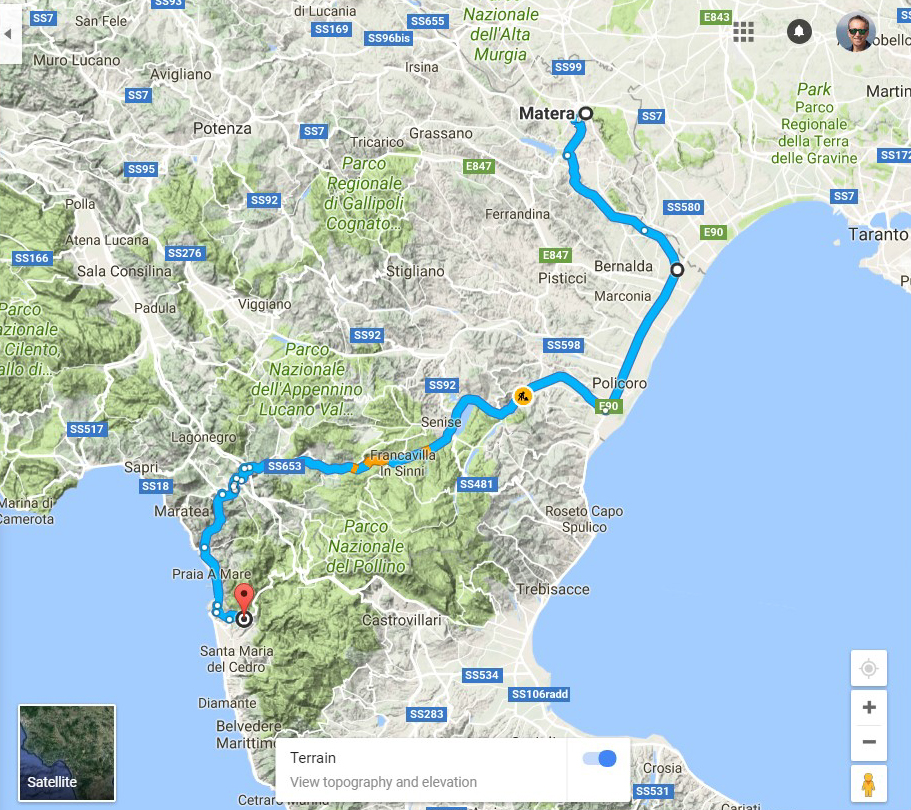 Taking a closer look at that route, I noticed an archaeological site marked on the map called “Tavole Palatine” near the city of Metaponto, right along our route: 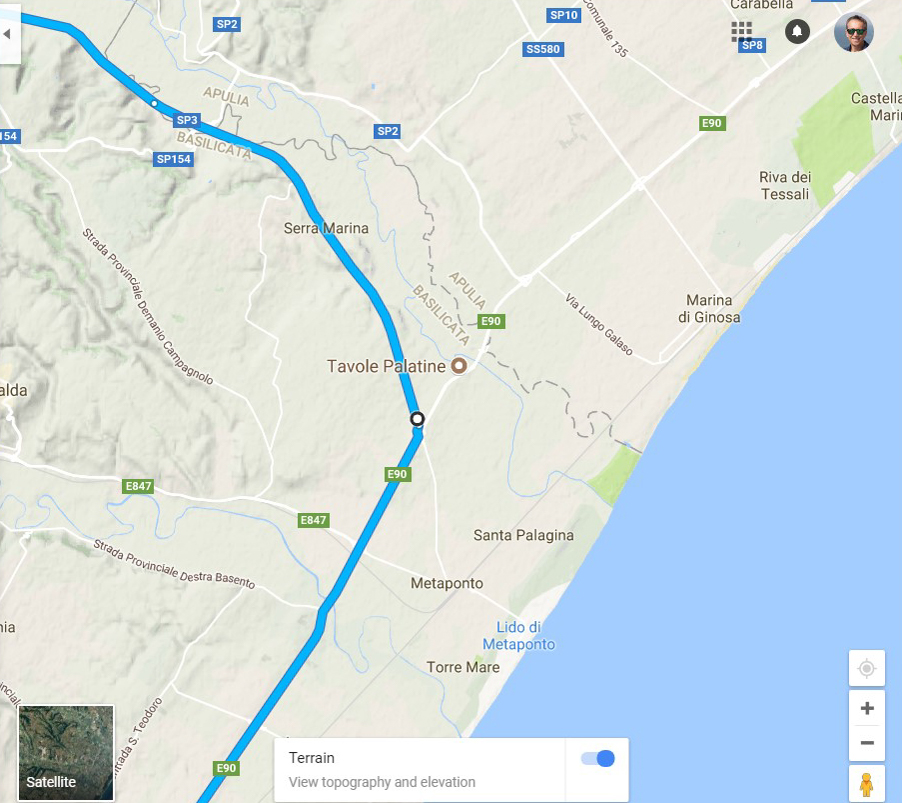 It turns out that the Tavole Palatine (or Palatine tables or hills) are the ruins of a sixth-century BC Greek temple dedicated to the goddess Hera, built on the site of the ancient Greek colony of Metapontum (now known as Metaponto). This intrigued me so we decided to check it out on our drive back from Matera.

We quickly found the entrance to the site, just off the E90 highway. 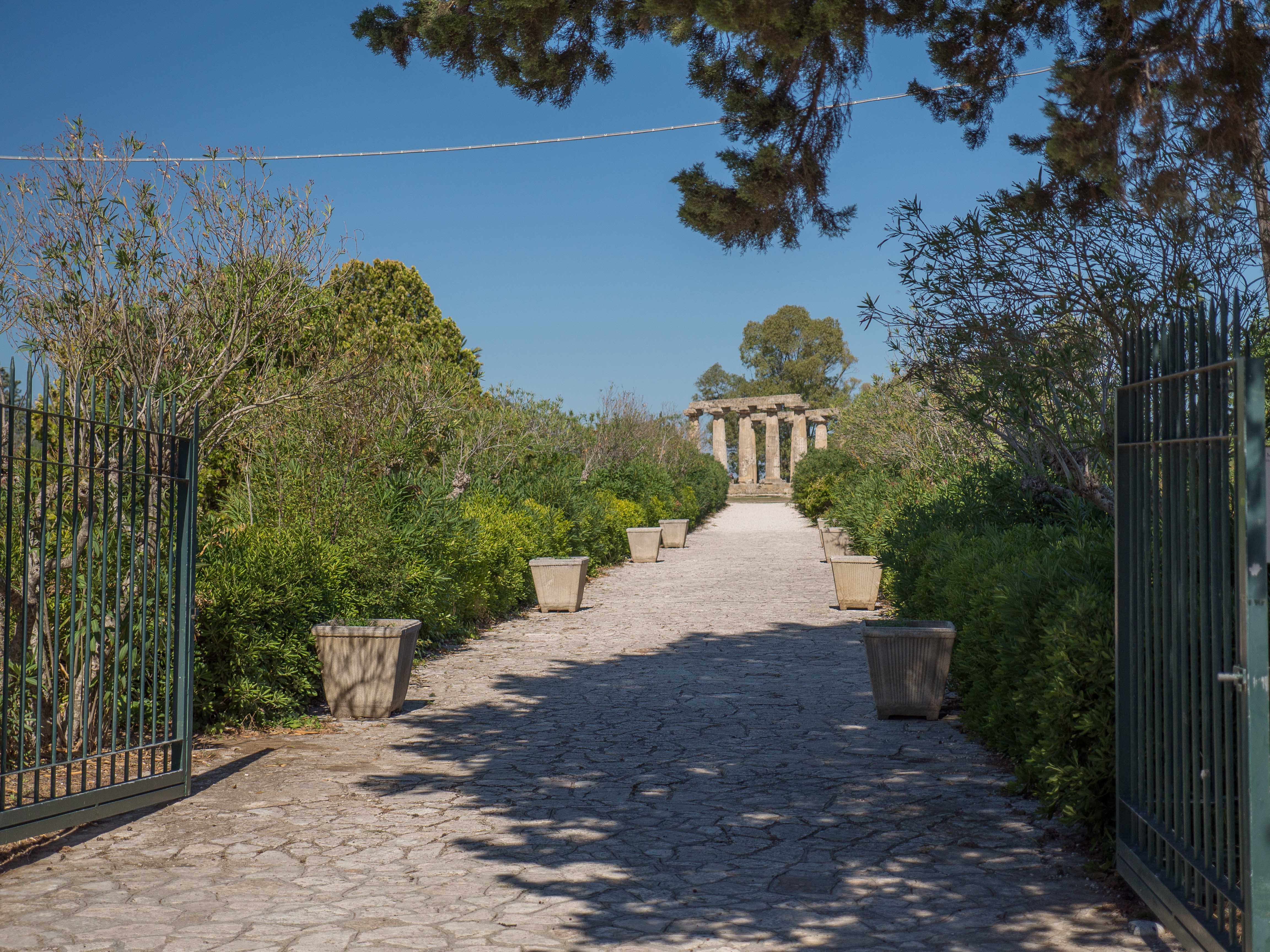 The ruins themselves are set back towards the back of the site. You can see fifteen columns of the temple now, but apparently there were originally thirty-two columns making up the original temple. The columns are made of a local limestone called mazzarro. 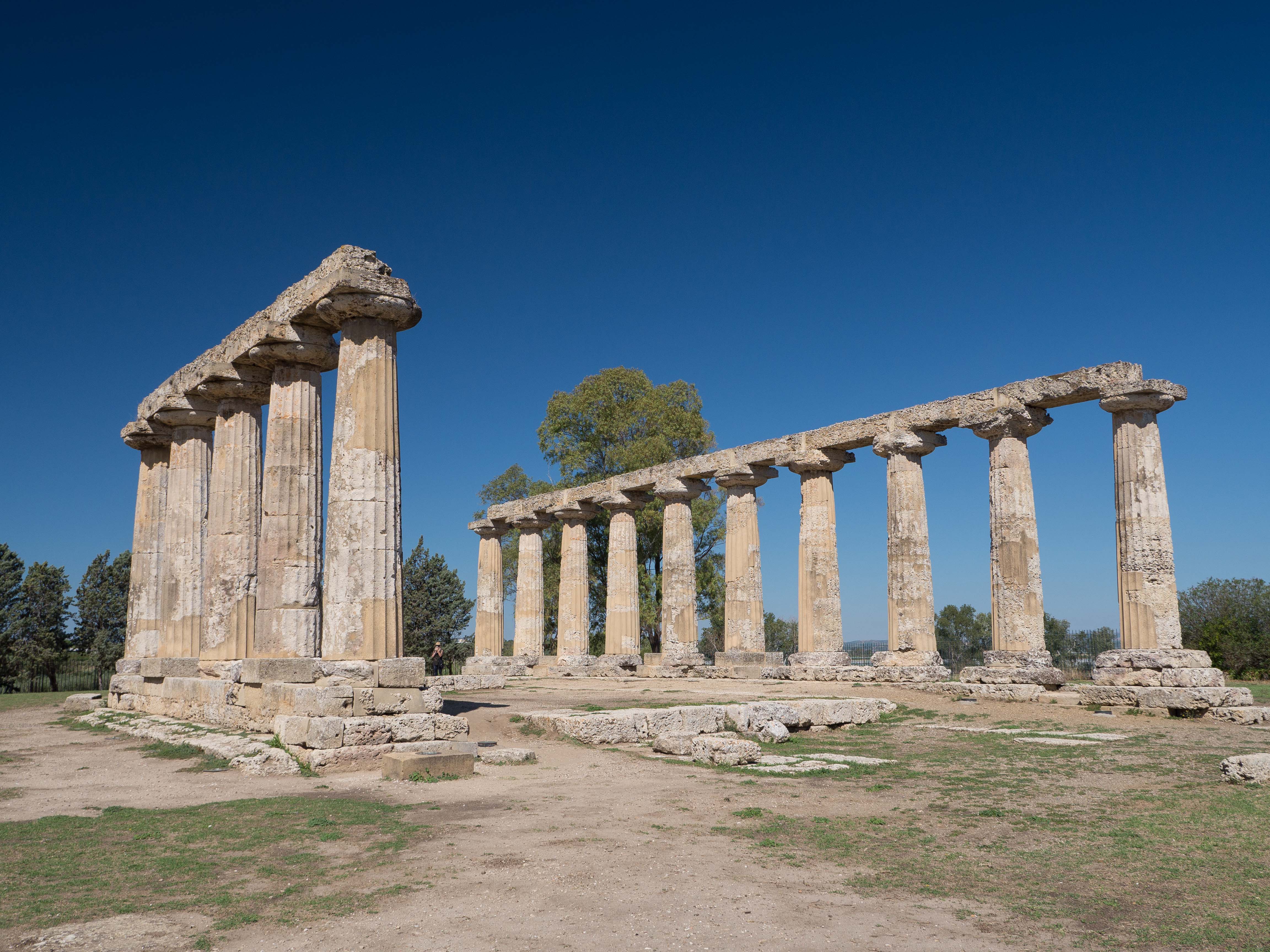 Originally the temple had a tiled roof with colorful decorations. Many remains of terracotta decorations and ceramics were found at the site and were originally kept at the Antiquarium there, but apparently they have all been moved to the Metaponto National Archaeological Museum (which unfortunately we didn’t get a chance to visit). 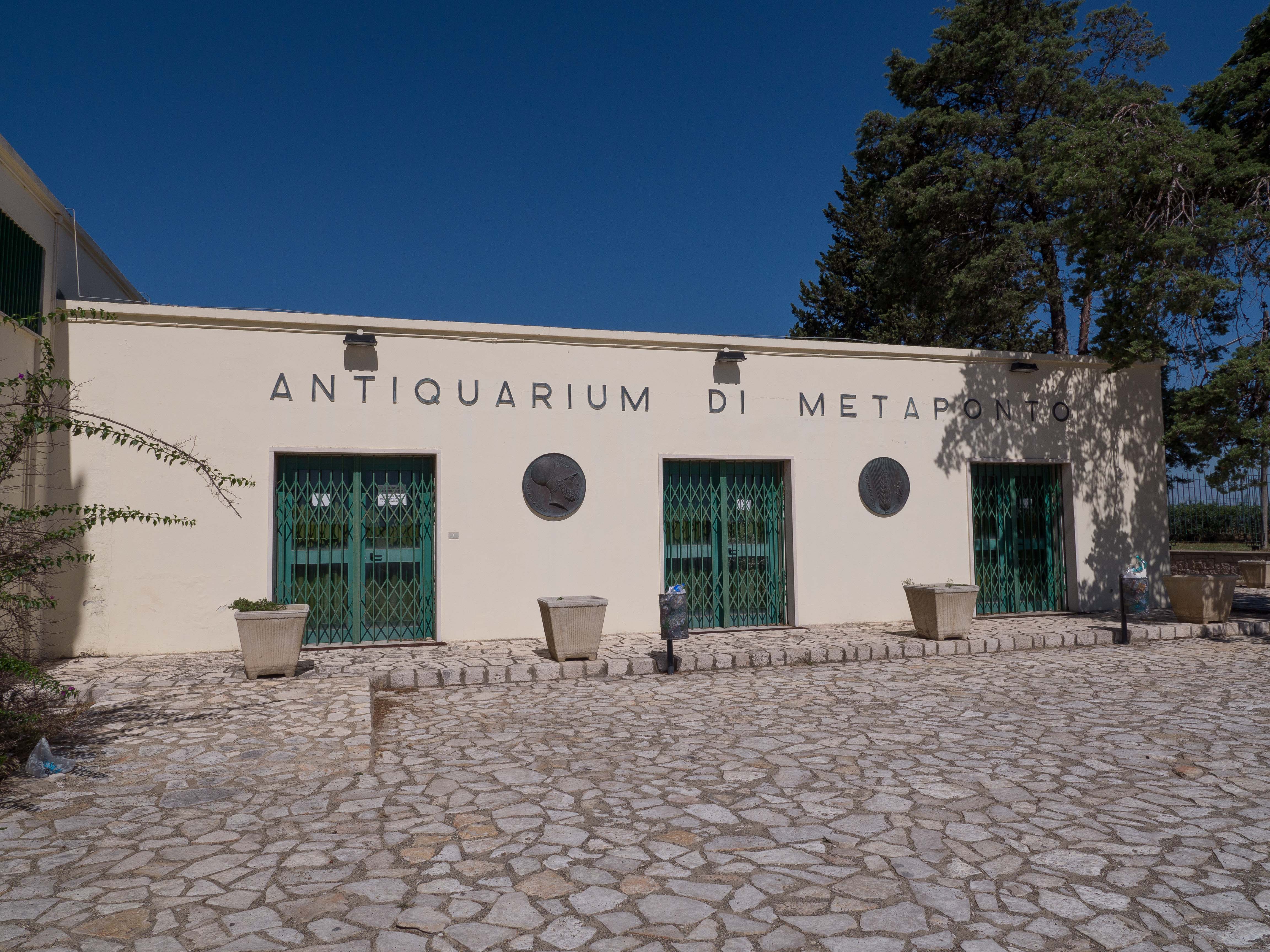 Reading up more about the city of Metaponto,  I learned it had become very wealthy as an exporter of grains and corn when it was a Greek colony. I discovered that the philosopher and mathematician Pythagoras lived there after leaving Crotone, due to the city’s ongoing skirmishes with its neighboring city of Sybaris or possibly because of being expelled from there along with the followers of his Pythagorean school.

Much later, the slave-rebel Spartacus sacked the town and spent the winter of 73-72 BC there training his army, and from there he went on to fight and defeat many Roman armies for the next two years.

Ancient Greek sites like the Tavole Palatine and Metaponto are only a few of the treasures of Southern Italy that await your visit!  Let me know if have any questions about the area or need any tips on what to see in Southern Italy.