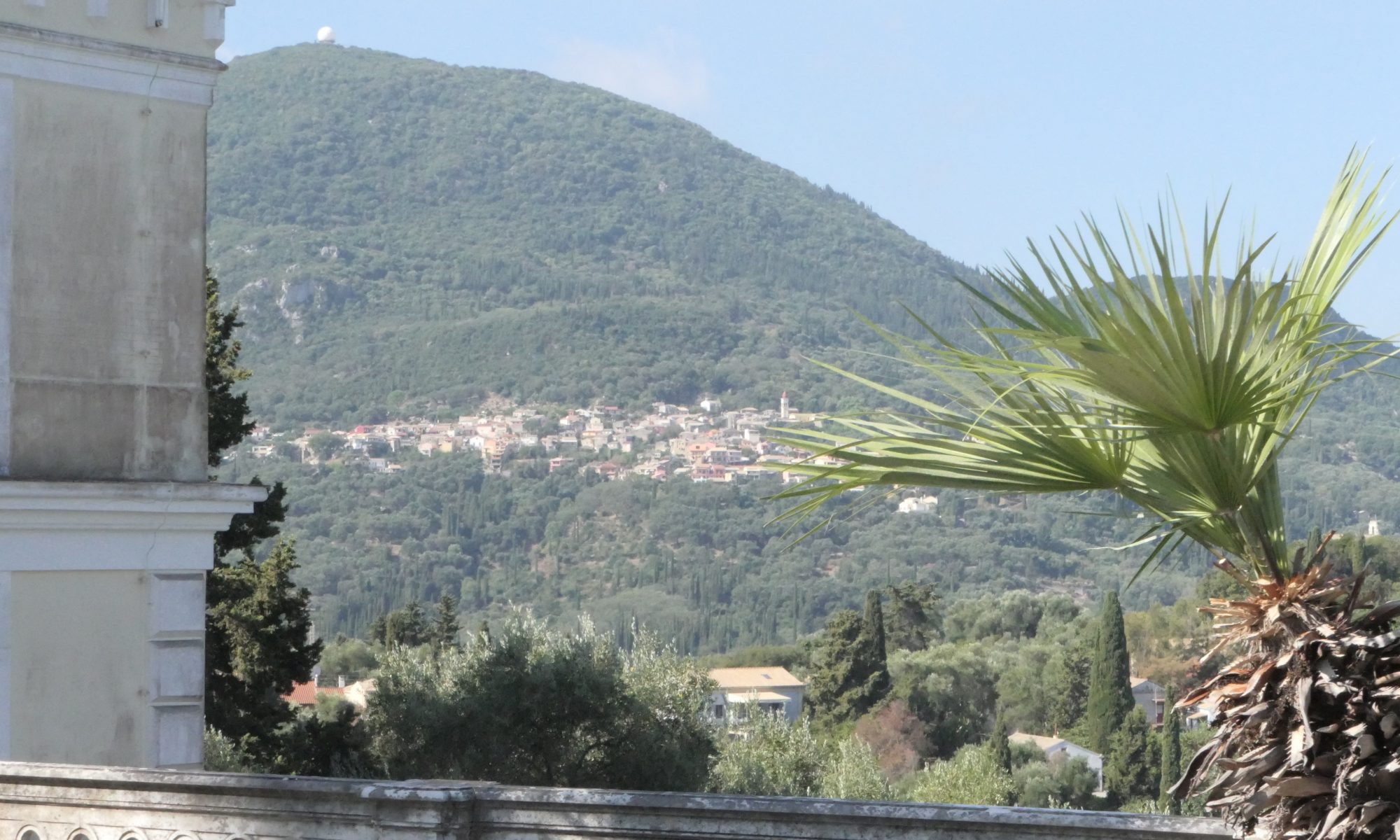 View of Corfu from the garden of the Achillion Palace

A few weeks ago, Pete and I boarded the Azamara Pursuit (A cruise ship with the Azamara cruise line, and yes they are Azamazing!)  and set off on a fabulous journey to the Greek islands.

This was our first visit to anywhere in Greece and we have to say we loved it. And our favorite place? You guessed it! Corfu!

Of all the islands we visited, we found Corfu the most enchanting.

Of course one day in Corfu is never enough however, if you choose a tour in the morning you still have all afternoon to do a ton of other fun things. Here is what we loved.

Prior to coming to Corfu, Neither Pete nor I had ever heard of the Achillion Palace, nor had we heard about the lady who had it built, the Empress Elizabeth of Austria, nicknamed Sisi.

Sisi, a young, shy girl from Bavaria first visited the home of the 23 year of Emperor Franz Joseph of Austria  in 1853 after his overbearing and oppressive mother had decided that he should marry Sisi’s sister.

This marriage was not to be however, as once Franz Joseph laid eyes on Sisi, he fell in love and defied his mother’s wishes stating that he would marry Sisi or not marry at all.

The two were married in April of 1854 and Sisi went from a relatively unstructured life in Bavaria to the highly regimented and suffocating life of the Hapsburg court.

Sisi was never allowed to raise her children as they were taken from her by her mother in law at their birth.

On a visit to Hungary in 1857, Sisi lost her daughter Sophie to illness. This caused even more stress and depression as she was then blamed for her daughter’s death by her mother in law who, by all accounts appears to have been a throughly hateful creature (my two cents).  Sisi never recovered from her grief.

Later Sisi gave birth to her only son Rudolf. Years later in what appeared to be a murder suicide, Rudolf and his lover were killed. This was a crushing blow to Sisi and left her in even deeper melancholy for the rest of her days.

According to our tour guide, Sisi’s health had never been good but after the severe oppression of her narcissistic mother in law and the loss of her children, Sisi’s physical and mental health declined further.

At the advice of her physician, Sisi came to Corfu for the climate which proved to be beneficial to her health.

Enchanted by the island, Sisi had the Achillion Palace built in 1890.

The palace is built on a hilltop and has sweeping views of the Mediterranean.

Achillion became her refuge from the court and her unhappy life.

The Palace itself is a whimsical blend of mythologies. It’s interior is richly painted with murals and decorated with cupids and other motifs.

The garden is small but lovely and has sitting areas where one can contemplate the sea, the mountains and the trees.

After a sad life, Sisi was murdered by an Italian anarchist named Luigi Lucheni who had decided that in order to be famous he would have to kill someone famous. Unfortunately the original target of his murderous plot was absent from Geneva the day he exercised his insane plan and he noticed Sisi and her entourage. Our tour guide told us that at that point he did not even know who she was, only that she was famous. He approached her in a friendly fashion and stabbed her garnering fame for a short time and becoming famous solely as a poster boy for Bedlam (Ok, I made that Bedlam part up but seriously, What a jerk!)

For awhile after the stabbing, Sisi appeared unharmed as the black garments that she wore since the death of her son hid the blood.

A short time later she fainted and a doctor was called. He arrived too late to save her.

The palace itself is a thing of beauty and a snapshot into a long gone era.

The drive to the Achillion Palace is also very beautiful in that it winds around clusters of pine trees and sweeps of crystal blue Mediterranean.

It is a lovely tour and a beautiful way to spend a morning.

Shopping in the City Center

Corfu’s old town/city center is beyond charming. The shops seem to burst their seams and spill their contents out into the streets. The street themselves are lined with marble stones creating an almost dreamlike beauty that leads you forward to the next little via or street filled with color and excitement.

Throughout the old town, look for fruit and vegetable markets. Follow your nose and the scent of lavender, it grows profusely in Greece and all kinds of lavender products are available. I picked up a couple of tiny bottles of lavender oil for relaxation. Ironically I paid over $50 for some scented oil on the ship but the little bottles I bought were 2 Euros each. Ok, now I know.

A great gift idea for all those people back home is packaged spices. They are authentic and take up very little room in your luggage. If you have people who love to cook, these little treasures are like bringing them an authentic Greek meal. I always pick up several packages of various spices when I go anywhere.

Greek food, I have discovered is one of my all time favorite cuisines. The rice dishes, the seasoned and grilled meats, the chick peas, cheeses and pastries Oh  My!

One of the signature dishes in Greece is Souvlaki which is another name for Shish Kabob. These are spiced perfectly and grilled to deliciousness over an open flame. To top it off they give you an aromatic rice dish or fries.

After a warm day of sight seeing, salty fries are the best.

I loved the food all over Greece. I had some of the most memorable meals there. Everything was fresh, creative and delicious. I think I might have to create a restaurant tour of Greece soon.

The Hop On Hop Off Bus

Corfu is lovely but if you only have a day, use the Hop On Hop Off buses. I love these buses. When new to a city I like to take this bus on a complete tour of the city to see what sites I might want to visit more closely later.

Then when you have determined what you want to see more of, board the bus and get off at the stops you want. When you are done, wait for the next bus and hop back on. This is an ingenious way to see so many things in a short time and it saves lots of wear and tear on the feet.

Corfu has a stunning coastline and spectacular beaches. If you go to the West side of the island you will find beautiful sandy beaches and if you go east, you will find pebbled beaches. Either way the water is crystal clear and impossibly blue.

Honestly there is so much to see in Corfu that a day is not enough. Pete and I do want to go back soon and spend more time.

However when you are on a cruise and only have a day, we found  this one to be really enjoyable.

So when you are ready to plan your cruise to Greece, Contact us! We found an amazing deal with Avoya Travel and Royal Caribbean and are going back next Summer. Perhaps you want to join us?  info@supersavvytravelers.com 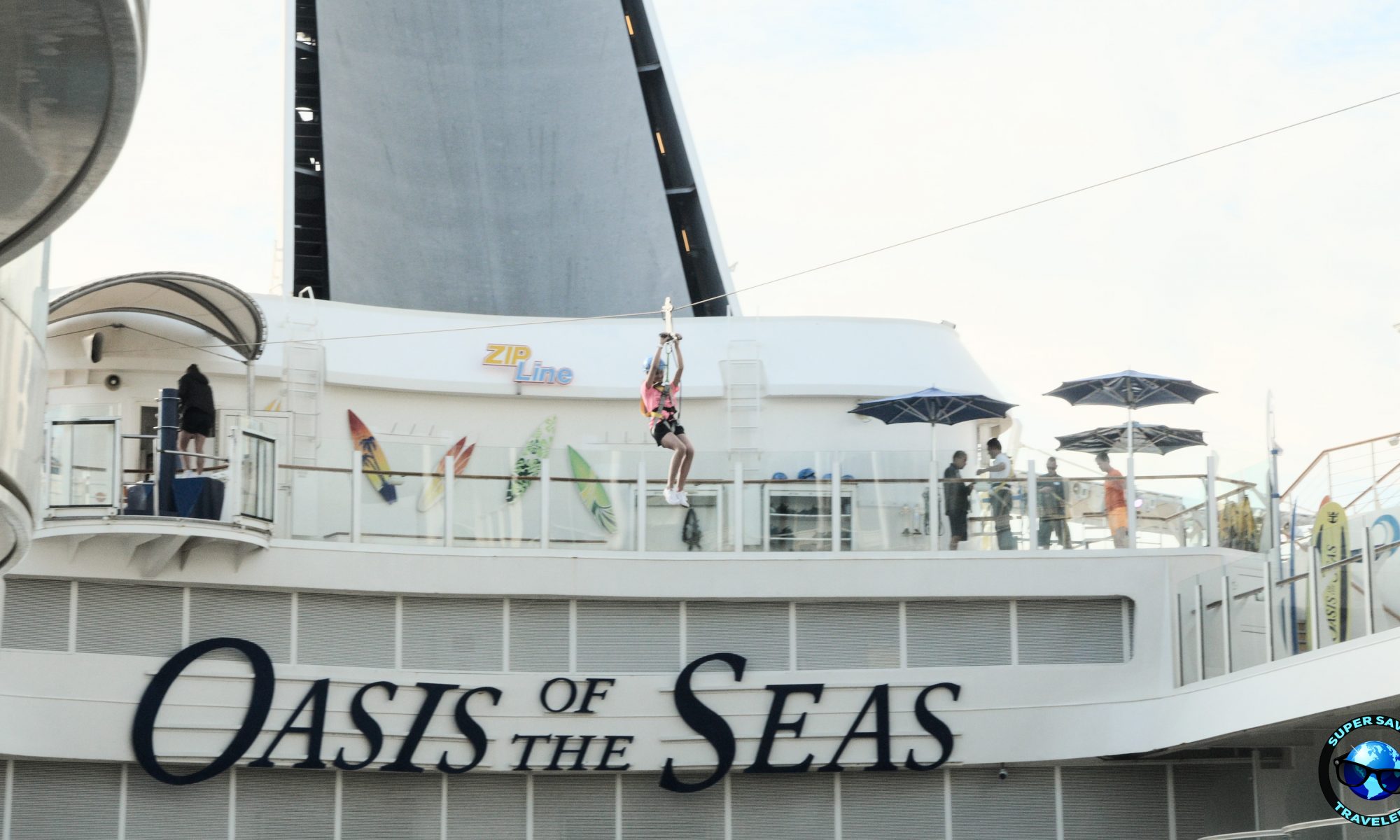 Oasis of the Seas

We recently completed a fabulous cruise on Royal Caribbean’s Oasis of the Seas, which we boarded in Barcelona and took us to visit Palma De Mallorca, Marseille, La Spezia/Cinque Terre, Civitavecchia, and Naples. In this video, Chris covers some of the highlights of our cruise and shows you some of the great features of the Oasis of the Seas! Click here for our video on Civitavecchia, the port of call for Rome. 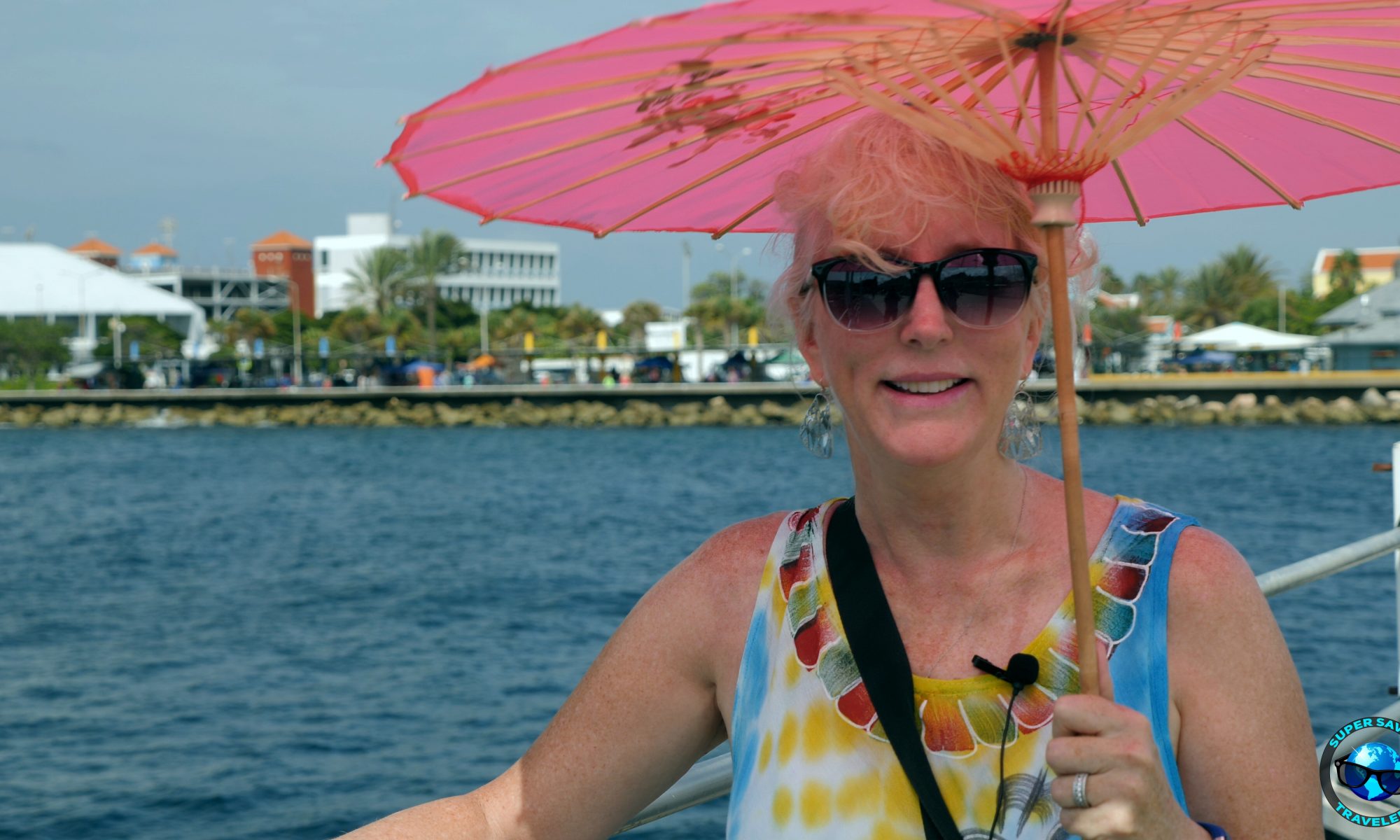 Chris has returned from a trip to the Caribbean with some tips on how to dress to survive the heat and humidity there.

Watch her video so that you too can survive your next trip to the Caribbean! 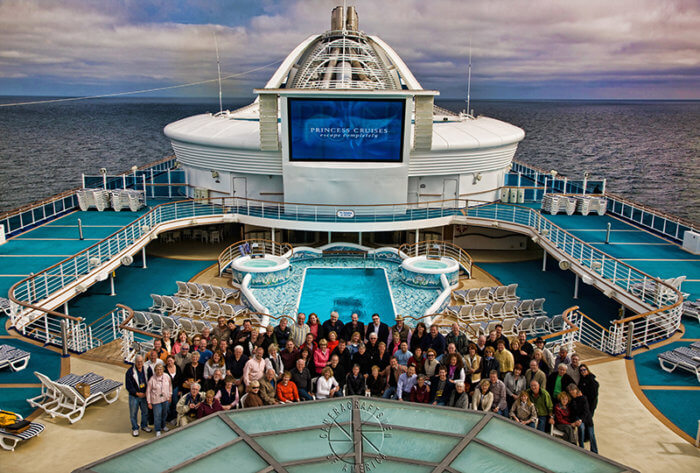 We at Super Savvy Travelers are Independent Agents affiliated with the Avoya Travel Network, and through this affiliation we can give you access to Avoya’s Open Promotion Groups. Avoya books large numbers of cabins on most ships under a special group fare codes, which are then available for us to use for our client bookings. Because Avoya is able to book these cabins at a large discount, we can pass the corresponding savings on to you.

Avoya is also affiliated with American Express Travel, who also book cabins into groups.  Through our affiliation with Avoya, we can also get access to these special group rates and amenities.

This doesn’t mean that you are booking into an actual onboard “group”; instead, you’re booking into a group fare code, which allows you to receive the associated group discounts and amenities without actually “being in a group” .

By booking your cruise through us, you can often get access to very significant savings on your cruise. For example, a client recently called me directly from the cruise ship he was on, because he had gotten what he thought was a good discount from that cruise line for pre-booking his next cruise.

Even though he was offered a lower deposit as well as on-board credit, I was able to beat his deal by several hundred dollars by taking advantage of an existing American Express group on the cruise that he was interested in.

Another client also contacted me about a cruise she was excited about, and was actually considering booking directly with the cruise line after getting a quote from them.  Although the cruise line was offering several deals at the time, I got her a quote, this time taking advantage of an existing Avoya group rate, that beat her quoted rate by several hundred dollars, and with additional onboard credit included.

Only independent Avoya travel agencies can gain access to these Avoya groups and Super Savvy Travelers is proud to state that we are an Avoya Independent Agency.

In addition to Avoya’s group rates, we also offer all special promotions only offered through Avoya as well as all promotions offered by the cruise lines.

Contact us today to take advantage of these special group rates and other fantastic promotions you can only get through Avoya, and the personal dedicated attention and expertise you always get with Super Savvy Travelers.

Imagine embarking on a 245-day long cruise that takes you to 59 countries and includes tours of 113 of the world’s greatest cities – more than most of us will visit in a lifetime! Well, Viking Ocean Cruises can now make this a reality for you on the Viking Sun, taking you on the world’s longest ocean cruise. The 2019-2020 Viking Ultimate World Cruise starts and ends in London and essentially takes you on a tour of the entire Western Hemisphere:

Prices start at $92,990 per person BUT this is a first-class cruise that includes:

Here’s a video overview of the Viking ocean cruise experience:

Contact us for more information on this unique experience! 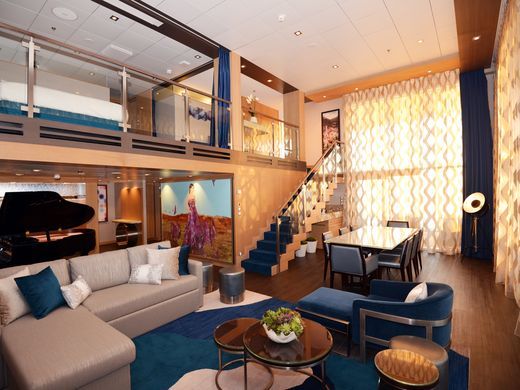 Royal Caribbean’s new Symphony of the Seas features some of the biggest suites at sea, including the 1,744-square-foot Royal Loft Suite.  Check out this USA Today story about the mega-suites on Royal Caribbean’s largest cruise ship ever built!